A detailed account of Homer’s journey to write The Golfing Machine can be found in the book “Homer Kelley's Golfing Machine: The Curious Quest That Solved Golf” by Scott Gummer.

Many people may be surprised that Homer Kelley’s first love in sports was tennis, rather than golf.

Growing up in Minnesota with the Minnehaha Falls State Park in his backyard, Homer learned to play tennis. He hung out with the local tennis pros and over the years became very proficient with the game.

He left Minnesota in 1929 with a friend, driving across the United States in a Model T with the goal to reach Seattle and get a job on a ship heading to Australia or New Zealand. His arrival in Tacoma, Washington was on October 29, 1929 which coincided with the stock market crash. As a result, they decided not to leave the country.

To make ends meet, Homer got a job at a local billiards hall as a cook – a job which he hated but one that kept him employed during the Great Depression. The owner was an avid golfer and gave Homer a series of golf lessons. This was his first exposure to the game and he approached it with a great deal of curiosity. He was always asking questions that the local golf pros couldn’t answer, and this lack of definitive information set the stage for the development of The Golfing Machine.

During World War II Homer landed a job at Boeing, the country’s foremost manufacturer of aircraft. There, working in the engineering department, Homer found a home for his inventive spirit; there he created solutions to problems that seemed to elude others. He also became an instructor, teaching Boeing engineers how to apply the problem solving skills that came so naturally to him. From there, he worked for the Navy and continued to apply his ability to invent and problem solve until the naval base closed.

Homer and I met in 1953. I had just returned from a 12-year stint working in Hawaii and was working in downtown Seattle as a bookkeeper at the Frise Precious Metals Company. I met Homer at church one day. We were both Christian Scientists, “a religion that is a simple, scientific system of metaphysics used by practitioners throughout the world. The teaching of the system begins with an understanding of the basic tenets and rules set forth in the Christian Science textbook.”

With our Christian Science faith so strongly based on science, it isn’t any wonder that Homer – a man who was a scientist and inventor at heart – applied his faith into his written work as The Golfing Machine. Christian Science teaches us that “pure science is built upon self-evident truths. Exact science is knowledge, so arranged that prediction and verification by experiment are possible. Application Science is a knowledge of phenomena as explained, accounted for or produced by means of powers, causes or laws. Christian Science fulfils every demand of these definitions – it is a provable, definitive and demonstrable truth.” And, when the same approach was applied by Homer to the golf swing, the result was the same – a scientific system based on verifiable truths that are proven, definitive and demonstrable. Just as with The Golfing Machine, Christian Science Founder Mary Baker Eddy writes, “To mortal sense, Christian Science seems abstract but the process is simple and the results are sure if the Science is understood.”

When I met Homer he had been making notes, since 1940, on the concepts which would evolve into The Golfing Machine. Those first golf lessons, the unanswered questions and lack of definitive information from golf professionals were “percolating” in his mind. Because of his “faith,” he knew that an answer would eventually show itself and that science would prevail. Later, in the book, Homer would define this time as the “incubation” period which is taking an idea that you don’t understand and turning it over and over in your mind, until eventually it yields an answer.

I got Homer a job at the Frise Precious Metals Company where he again used his problem solving skills to invent a way to separate the mercury from the silver. We were married in 1954 and moved into our first home in the Wedgewood neighborhood in North Seattle shortly thereafter.

With his new job he had more time to spend playing golf, and with that he began to pull together the concepts that later formed the book. Homer felt so strongly that there should be no reason for the lack of knowledge about the golf swing that in 1960 he quit his job to work on the book full-time. We bought our second home, just blocks from our first home, and it was there that he set up a studio in the garage and started to write – “hunting and pecking” on the typewriter every day.

During that time we would often go together to a driving range across from the University of Washington. There he would hit balls and use me as a sounding board to critique him. He would often take the time just to observe people on the range hitting balls, making comments like “ten years from now that guy won’t be any better. All he needs is a little definitive information.” He was always analyzing people and working on his own swing as well. The pros at the range would point him out to people and say to their students, “See him? That’s how you should do it!” And he even worked on my swing which improved greatly under his instruction – another proof point that the ideas he was writing about were solid and applicable.

When the book was published in 1969, there were both skeptics and followers to Homer’s work. To the skeptics, Homer would always patiently approach criticisms with “That’s an interesting thought, but what if you looked at it this way?” He made sure that people understood that he did not make up the information in the book; that, in fact, The Golfing Machine is based on scientific principles covering physics and geometry. Homer – using the same problem solving techniques that he used with any job combined with the basis of his faith as a Christian Scientist – explained that he simply applied these age-old proven principles to the golf swing. And with that, The Golfing Machine was born.

But for some, they just weren’t ready for this approach to golf – for many, he was before his time. He knew that they were arguing scientific principles and didn’t take their criticisms personally. He hoped that eventually they would understand that he was only interpreting this information, and he was willing to share the knowledge knowing that it was proven.

His followers became a very devoted group. Even some of the famous names came to our house for instruction and took a break in the kitchen to enjoy my homemade chocolate chip cookies and milk. Homer found himself traveling more and more to teach and present the concepts in The Golfing Machine. During the 1970s and early 1980s, many articles were published about Homer and the book.

With that notoriety, golf instructors came to him for more information. He realized that the world could benefit from instructors trained with the definitive concepts of The Golfing Machine. So, he set forth to develop an authorization program that would allow instructors to easily explain these scientific concepts to their students. Ben Doyle, Tommy Tomesello, Alex Sloan, Don Shaw, and Larry Aspenson, were some of the first to follow Homer’s works, and many would follow until Homer’s death in 1983.

While Homer’s death was untimely – The Golfing Machine’s authorization program was just hitting its stride – I can certainly say today that Homer would be pleased to see that The Golfing Machine is moving forward in the direction that he had intended. He would tell those who are interested and perhaps even struggling with some of the concepts they are learning in the classes to “hang in there – you are on the right track.” The current program continues to reflect Homer’s vision, appreciation for knowledge and his application of scientific principles to all facets of The Golfing Machine. 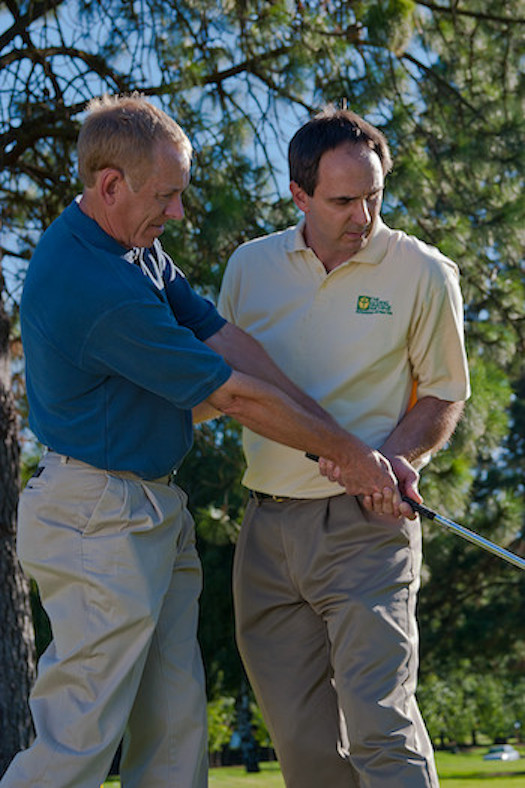